Why multivariate analyses are not more widespread in astrophysics, especially in the extragalactic domain? I have not really the answer (I have some ideas though…), but let me show some plots that should help convince (astro)physicists.

Firstly, do you remember this conference help in 1990?

This shows that the debate about the morphological classification of galaxies is quite old, certainly thirty years at least!

Secondly, the three plots below show the radius versus the mass. On the left plot the colors correspond to the de Vaucouleurs morphological classification index T. On the right plot the colors correspond to a multivariate classification, this one obtained with cladistics. The third plot below is the result of a numerical simulations showing different evolutionary scenarios, the colors indicating the redshift of the last major merger and the dispersion within each colors corresponds to various initial conditions (masses, quantity of gas, impact parameters of the collision). The references are Fraix-Burnet et al 2010, 2012 and Robertson et al 2006. 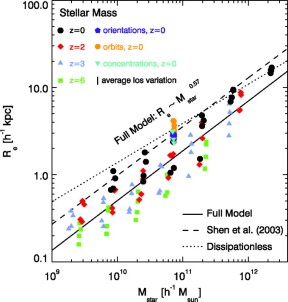 What you can see is that the morphological classes all show the same correlation between radius and mass, implying that all galaxies (here only ellipticals) share the same history! We know this is obviously wrong since at least mergers could not have occurred all at the exact same redshifts.

By contrast, the multivariate classification distinguishes several different evolutionary scenario for the groups, easily identifiable with the numerical simulations. I have sometimes been told that I was not doing physics with astrocladistics. Really?

There is here a very rational argument in favor of multivariate classification. When you perform a numerical simulations on the evolution of galaxies like the one above, you have many free parameters even for the sole event of merging: masses and amount of gas for the two galaxies, the impact parameters (intensities and directions of relative velocities, directions of rotational axes, internal dynamics). May be ten parameters or so. With a monovariate classification, you bring one unique constraint. Ten unknowns, one constraint: this is an ill-posed problem, which has mathematically no solution. In the cladistic classification shown above, six parameters were used. Still ill-posed, but much less, the physics is much better constrained.

Lastly, let me consider another example, the famous fundamental plane of the galaxies that I show below nearly face-on on a velocity dispersion vs surface brightness plot. To the left, the projection of a cladogram (Fraix-Burnet et al 2010) with the color coded groups, and to the right the color-coded morphological classification.

Scaling relations like the fundamental plane, known for more than twenty years, are correctly thought of being essential to constrain the physics of galaxies and their evolution. But with the morphological classification, there is only one scaling relation for all (elliptical) galaxies. Who could really believe nowadays that they all have the same properties and the same history??

I do not know whether this is the first time such comparative plots are published, but they should definitively convince astrophysicists to do multivariate classification. Indeed, I am not the only one to know this as shown by this census of publications dealing with multivariate analyses of galaxies: 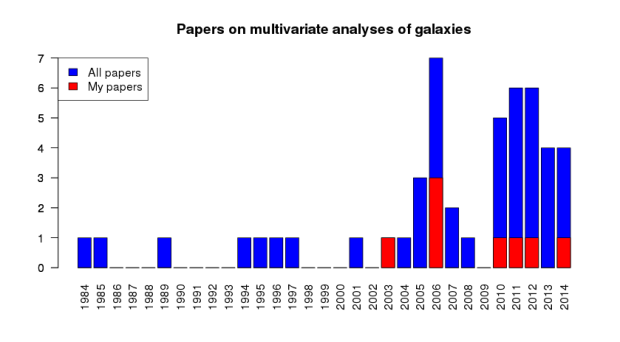 There is a clear increase of studies since 2005. Ok, this is not overwhelming, and my question is why.

May be two reasons to that, the first one being the difficulty of multivariate statistics and classification, the second one being to adapt our strategies for the physical interpretation to these kinds of results. But I do not think they are sufficient, astronomers are clever people and statisticians are pleasant collaborators. Astrostatistics is not new, and is well anchored in cosmology, solar physics, and somewhat in stellar astrophysics.

So despite the enormous efforts by some people (of course I am thinking to Eric Feigelson and Jogesh Babu, and there are others as well), why these multivariate analyses have not pervaded astrophysics? Why extragalactic astrophysics so reluctant to jump into the modern world? Why despite the morphological classification has been disputed for more than thirty years and is known to be unsatisfactory, no progress has been made?

And why so much resistance against astrocladistics? In the early days, I encountered some skepticism: “it will not work”. This is obviously wrong. I now face some incredulity: “it is useless”. I have proved that this is wrong as well.

Phylogenetic approaches like cladistics (Maximum Parsimony) might not be the end of the story, but multivariate analyses in general are. So why so much resistance? May be the answer was given by a referee recently: “I do not see its utility for conventional astronomy”. Yes, “conventional”.

When people do not want to be convinced…

This entry was posted on March 30, 2015, 11:00 and is filed under Classification, Complexity, General. You can follow any responses to this entry through RSS 2.0. You can leave a response, or trackback from your own site.